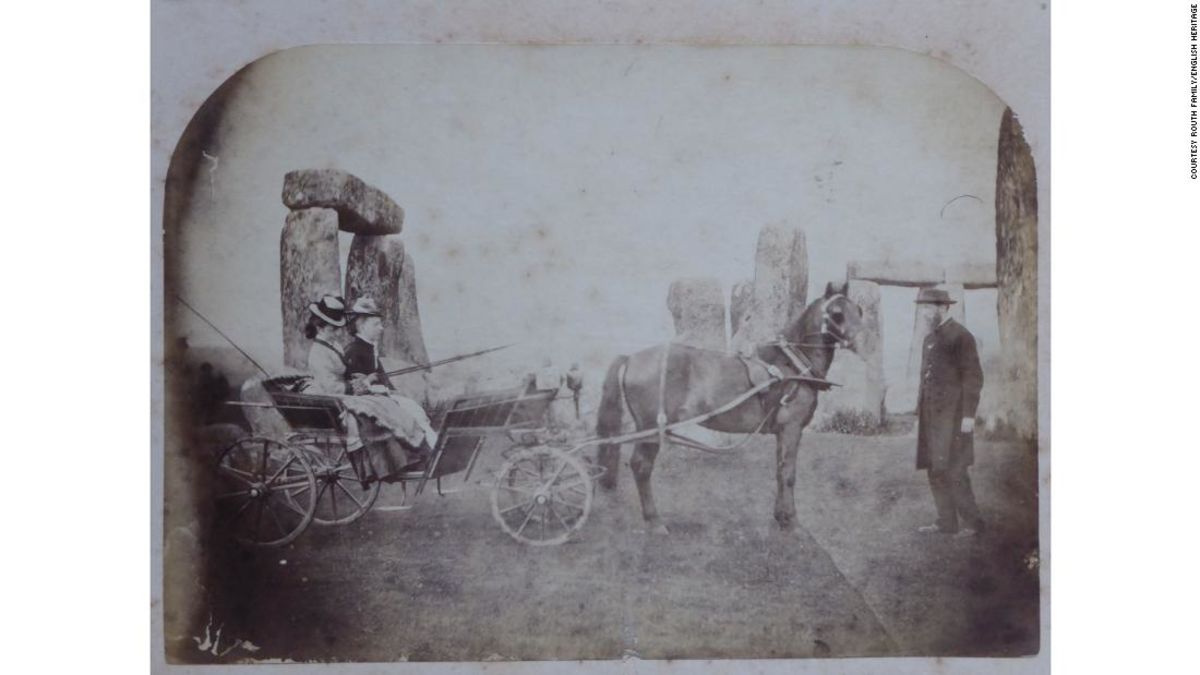 The image shows Isabel, Maud and Robert Routh as they enjoy a day out at the ancient site, complete with horse and carriage.

The photographs will be displayed as part of an exhibition to chronicle 150 years of visits to Stonehenge.

The picture, contributed by the family’s descendants, will be displayed alongside 147 others as part of “Your Stonehenge — 150 years of personal photos” — an exhibition chronicling 150 years of visits to the famous sarsen stones in Wiltshire, England.

The photographs were collected after English Heritage, the charity that looks after the ancient site, asked people to share their own photographs of the monument last year to mark 100 years of public ownership.

148 photos, sent in by the public, will go on display.

The images range from the everyday to the tragic — one photograph of 20-year-old Sergeant Observer Douglas Brian McLaren and his little sister Joyce captures the last time Joyce, then 10, would see her brother, who was on leave from the Royal Air Force.

“It was the last time we saw him. He was posted to Malta and reported missing, believed killed on a bombing raid attacking a German convoy taking supplies to Rommel in North Africa on January 8th 1942,” Joyce said.

Photographer Martin Parr, who assisted with the curation of the images, also supplied the most recent image in the collection — of an unknown couple taking a selfie on the autumn equinox with the stones in the background.

“I first photographed Stonehenge years ago and it was fantastic to be invited back to photograph it again for this exhibition. I loved looking at the images that people sent in,” Parr said in a statement.

Martin Parr, who took this image during the autumn equinox, is now looking to identify the couple in the photograph.

“They really show what the stones mean to people and how our relationship with a site like Stonehenge has changed and yet stayed the same through time,” the photographer said, adding that he would love to track down the couple in his photo and present them with a copy.

“People have been visiting Stonehenge for centuries, for all sorts of reasons, and taking photos of themselves and their loved ones in front of the stones since the very earliest days of photography,” Susan Greaney, a historian at English Heritage, said.

This was the last time 10-year-old Joyce McLaren saw her brother, who was on leave from the RAF.

“The monument has provided a constant backdrop to millions of family memories, and in some cases has even played a part in changing the course of people’s lives.

“Our captivating new exhibition shows just how we are all a part of Stonehenge’s story and it is a part of ours,” she added.

The Titanic will be protected by a treaty between US and UK
Visit Italy – The DON’Ts of Visiting Italy
WHO postpones decision on declaring China coronavirus a global health emergency
Super Bowl 2020: Here’s your travel guide to the big game in Miami
Let’s celebrate Tallahassee’s past to change the future