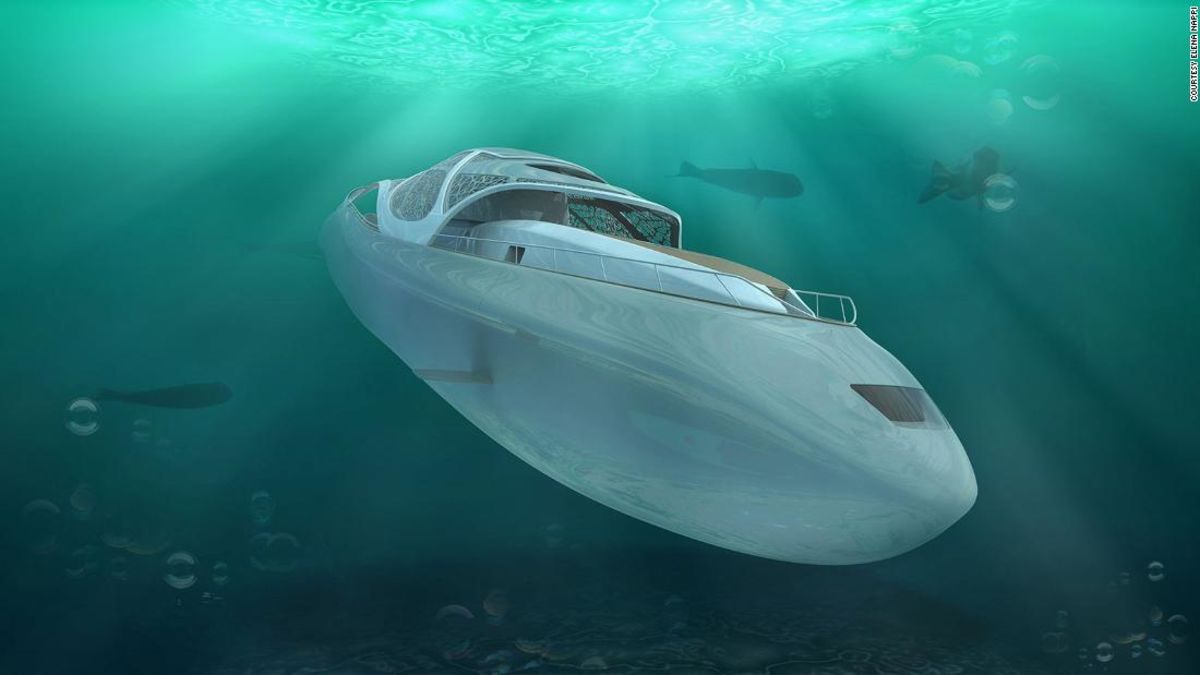 (CNN) — It looks like something straight out of a James Bond movie, but this concept might just signal that the future of superyachts is sub-aquatic.

Dreamed up by Italian-based naval architect Elena Nappi, the hybrid vessel can travel on both the surface of the sea and underwater.

Known as the “Carapace,” it submerges to a depth of 985 feet for up to 10 days at a time, offering amazing views of marine life.

Nappi, who came up with the innovative concept after years of nautical experimentation research, says it represents a “new class of mega yachts,” bringing together the cosiness of luxury yachts and the “privacy” of immersion navigation.

A rendering of hybrid vessel Carapace, which can transform into a submarine.

“The world of luxury submarines is one of the last frontiers in the field of experimentation, and perhaps the hybrid will be the language of the future,” Nappi says in a statement.

“Very often yacht owners are looking for original solutions to be able to offer their friends and their family something special, and certainly that of a diving cruise of this type is something unprecedented in the super yacht market.”

Carapace, which would be powered by a diesel-electric and fuel cell system, is designed to have a light aluminum superstructure that measures 256 feet in length.

It would hold three deck levels, with VIP cabins, a lounge, a spa, a bar and health club among the onboard amenities.

The vessel concept represents a “new class of mega yachts,” according to its designer.

Nappi envisions it being hired for private trips, as well as business meetings that require “complete secrecy.”

Although there’s no indication of a price as yet, it’s thought the vessel will set buyers back some hundreds of millions.

But anyone hoping to get this hands on this mega yacht should sit tight.

At present, the Carapace is merely a concept, and Nappi predicts it will be a long while before anything like it hits the waters.

“If we make a comparison with the automotive sector, it is not hard to understand that the road to this type of boat is still very far away,” she adds.

“The first electric car was built in 1884 and is only on the market today, so it is impossible to think that a harness like this could be put on the market before 100 years.”

Nappi is currently a designer for Italian shipyard Fincantier, but the company is not involved in the Carapace project.

Best ski holiday deals for February half-term 2020, and top family resorts to avoid the crowds
The airline that came back from the grave
Boeing is in talks to borrow $10 billion or more as 737 Max crisis wears on
He nearly died hang gliding. Then he did this…
Alabama lynching memorial expands to cover the stories of 2,000 more people